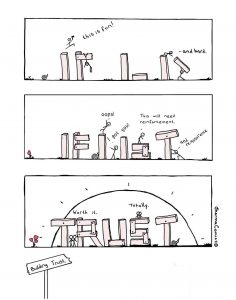 “Five to Fold is a methodology for effective, holistic group decision making, or decision creation.
Five to Fold fosters open and honest communication, and continuous contact between individual and organizational purpose/essence. Five to Fold helps organizations to evolve rapidly as living entities.”

5toFold is a consensus decision making process. It is an efficient and powerful way to make both day-to-day and large, complex decisions. 5toFold builds trust, individual responsibility, and accesses the wisdom of the whole group. This short description invites you to use 5toFold in your own group.

How to – a step by step instruction

Our experience is that 5toFold works best with participants in a circle, without a table.

At this stage, participants are not yet allowed to share their opinions or perspectives.
This prevents unnecessary discussion with opinions that are based on a lack of full understanding.

4. Talking Circle
The talking circle gives each participant the opportunity to share his/her perspective on the proposal.

Use a ”talking object” to allow each participant to speak without interruptions.
This also supports deeper listening.

If the proposal is perceived as simple/self-evident, this step goes quick.
However, it is important to take the time, as this is each participant’s opportunity to share his/her own personal view.

This discussion is facilitated by putting the talking object in the middle, and then whoever wants to speak picks up the stick, talks, and then puts it back. This continues until finished

5. Transiting into Making the Decision
Before voting , the facilitator will check with the sponsor if they want to
a) move to voting on the proposal — if so, the process continues with 6.
b) revise the proposal based on the feedback.
If it’s a larger rework, the process stops and the sponsor will present the revised proposal later. [1]

6. The Finger Vote
The facilitator reads out the propsal and then invites the participants to give their votes. The votes are given at the same time (“one, two, three – go”).

The facilitator explains the meaning of the different votes before the actual vote.
A moment of silent reflection is also customary.

The range of votes in the finger-vote is recorded, including who voted.

7. The Decision
Based on the results of the vote, the facilitator proceeds according to one of the following alternatives:
a) If no one has folded, the facilitator announces that the proposal has become a decision, then checks in with any ones or twos whose concerns are recorded in the minutes.
b) If there has been a fold, the facilitator announces that the proposal is not a decision, and the person/s who folded are invited to share their concerns which are recorded.
Ones and twos are invited to share their concerns as well.

The facilitator often invites to a break, allowing all participants to reflect and gather their thoughts before the meeting continues.

Celebrate? Of course! Everything from applause to jungle roars is encouraged and suitable…

Next Steps
The facilitator proceeds by:
a) After the decision, first celebrate the decision (also when it’s a Fold!) and then continue and articulate the next step(s) necessary to implement the decision. This is also recorded.
b) If the proposal was folded, the proposal is handed back to the sponsor. The sponsor and the participants may reflect briefly on how to continue—i.e. whether and when the topic of the proposal may be revisited for negotiation.

[1] Sometimes the sponsor is ready to immediately revise the proposal, for example during a short break, but can also choose to revise and propose at a later stage. Also note that it is at the sponsor´s discretion to incorporate feedback from steps 3-4.

This website uses cookies to improve your experience while you navigate through the website. Out of these cookies, the cookies that are categorized as necessary are stored on your browser as they are as essential for the working of basic functionalities of the website. We also use third-party cookies that help us analyze and understand how you use this website. These cookies will be stored in your browser only with your consent. You also have the option to opt-out of these cookies. But opting out of some of these cookies may have an effect on your browsing experience.
Necessary Always Enabled
Necessary cookies are absolutely essential for the website to function properly. This category only includes cookies that ensures basic functionalities and security features of the website. These cookies do not store any personal information.
Non-necessary
Any cookies that may not be particularly necessary for the website to function and is used specifically to collect user personal data via analytics, ads, other embedded contents are termed as non-necessary cookies. It is mandatory to procure user consent prior to running these cookies on your website.
SAVE & ACCEPT