2007-2011 I taught a modality where creating well-formed belief statements was part of the curriculum. The five key elements that 500 adults accepted and learned where:

For example: I share my knowledge, get to travel the world, and have a blast along the way.

(Instead of: I want to share my knowledge, although not only in Germany, and I hope that I’ll enjoy myself, meet people that like me, get to see interesting places, and… stop!! You get the point 😉 )

It wasn’t until I experimented and taught this modality to children, that one of them TAUGHT ME the missing principle: 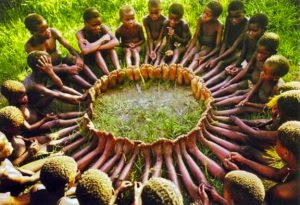 Since then, I practice this intention in everything I do.

Thank you, wise children, for enlightening me…

At its base is the belief
“Umuntu Ngumntu Ngabantu”:

“I am because we are and
we are because I am.“

The word Ubuntu originates from the Bantu languages of the Zulu and Xhosa and means „humanity / humanness”. „compassion“ and „publich spirit“ as well as the experience and the consciousness of oneself being part of a larger whole.

It is often used in a more philosophical sense to mean “the belief in a universal bond of sharing that connects all humanity”.

This refers to a fundamental attitude based primarily on mutual respect and recognition, respect for human dignity and the desire for a harmonious and peaceful society, but also on the belief in a “universal bond of sharing that unites all that is human.”

This website uses cookies to improve your experience while you navigate through the website. Out of these cookies, the cookies that are categorized as necessary are stored on your browser as they are as essential for the working of basic functionalities of the website. We also use third-party cookies that help us analyze and understand how you use this website. These cookies will be stored in your browser only with your consent. You also have the option to opt-out of these cookies. But opting out of some of these cookies may have an effect on your browsing experience.
Necessary Always Enabled
Necessary cookies are absolutely essential for the website to function properly. This category only includes cookies that ensures basic functionalities and security features of the website. These cookies do not store any personal information.
Non-necessary
Any cookies that may not be particularly necessary for the website to function and is used specifically to collect user personal data via analytics, ads, other embedded contents are termed as non-necessary cookies. It is mandatory to procure user consent prior to running these cookies on your website.
SAVE & ACCEPT